Campaign for US Congress 2020

​​Truth for a Change

By So. Dak. Dispatch. This video is not sponsored, endorsed, or paid for by Randy Luallin for US Congress.

Creator simply grabbed some highlights from late in the broadcast and added some words and other footage. (​4 min.)

TO MY DEMOCRAT FRIENDS:

In my over half a century of life we have been engaged in undeclared war and conflict and the sacrifice of our precious youth and vast military.  This must come to an end!  I will work for peace and the use of our military solely for defense of our amazing country.   I will work tirelessly for equal treatment under the law in all aspects of society from opportunity to Justice and how it is meted out.  You and you alone will get to decide whom you will love, what you do with your body.  Life without invasion of privacy.

TO MY REPUBLICAN FRIENDS:

The paradigm of representative government only by those of wealth and power has excluded the common man.  This must come to an end!  I will work to reduce the size and control of government and concentrate it locally.  The spending and its need for taxation must be reduced .  You will get to decide how to spend your money and whom you will charitably give too.  The concept of the citizen statesman concerned with the good of all needs to return.  Criminality should only consist of those that have hurt or defrauded a fellow citizen or damaged property.   Regulation and law that ingratiated groups, individuals or business shall be expunged.  Unchaining our amazing people to seek their destiny.

TO MY INDEPENDENT FRIENDS:

The country has been divided too long by the duopoly of the two party system!  The need to vote for evil even tho it is the lesser has come to an end.  I can walk in both circles of the current system and bring them together for the common good.  You will have the deciding vote in a new paradigm that rejects the need for monetary clout to get elected.  In this new beginning self responsibility by the voter to research and decide outside the bombardment of deceptive media will be the rule.

10-27-20_Coffee and Conversation with CJ Abernathey 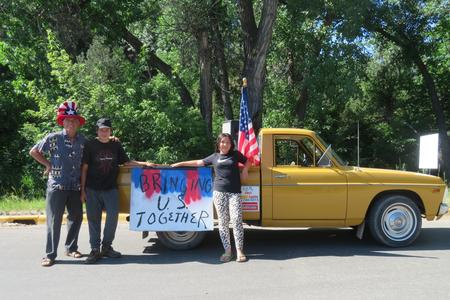 ​​ The job of Mayor as head of the executive branch of city Government is to execute the will of the people as put forth by their representatives  “Alderman”.   To chair the Council meetings and if a tie occurs to cast the deciding vote.  The Mayor has the authority to veto a Council decision.  The Mayor manages the city in all its departments and has authority to hire and fire non elected individuals.

Currently and for the approximately the last 20 years the City has been operated illegally outside of the South Dakota State Statues by hiring a City Manager/Administrator  for a fee of $60,000.00 per  year.  The statute is:

If a petition signed by fifteen percent of the registered voters of any first or second class municipality as determined by the total number of registered voters at the last preceding general election is presented requesting that an election be called to vote upon the proposition of employing a city manager, the governing body shall call an election for that purpose. Upon receipt of a valid petition, the question shall be presented at the next annual municipal election or the next general election, whichever is earlier. However, the governing body may expedite the date of the election by ordering, within ten days of receiving the petition, a special election to be held on a Tuesday not less than thirty days from the date of the order of the governing body.

The election shall be held upon the same notice and conducted in the same manner as other municipal elections. The vote upon the question of employing a city manager shall be by ballot which conforms to a ballot for statewide question except that the statement required to be printed on the ballot shall be prepared by the municipal attorney.

THIS ELECTION HAS NEVER OCCURRED!

The function of our servant City government is to provide Good Roads, Water service, Sewer service, Police protection, Fire protection and administer and mange the public lands. These things will make the city a desirable place to live and conduct business.

Currently the city contains numerous roads that are unpaved.  Residents without sewer service.  Antiquated water and sewer infrastructure in need of maintenance or replacement.  Roads and alley ways that are on the map but do not exist physically.  Efforts should be directed towards this and addressed.

1. Wesch Oak building was torn down at great cost to the taxpayer app $70,000.00.  This private property was condemned with a $1500 fee to an engineer who simply walked in and out of the building with no calibrations.  A second opinion by a privately funded engineer was not allowed access to the building.  This condemnation required the DOT to stop progress on the 385 Road project until it was torn down.  Even now this private property is being used for storage by the 385 project without permission and without compensation.

2. The recent destruction of the Fall River wetlands and riparian area was performed in violation of city ordinance under the Flood Hazard Reduction  153  specifically
(a)   Notify adjacent communities and the State Department of Environment and Natural Resources prior to any alteration or relocation of a watercourse, and submit evidence of such notification to the Federal Emergency Management Agency.
(b)   Clearing and grading.
(1)   Clearing and grading of natural resources, such as forests and wetlands, shall not be permitted, except when in compliance with all other chapters of this section.
(2)   Clearing techniques that retain natural vegetation and retain natural drainage patterns, as described in the SD-DOT BMPs, shall be used to the satisfaction of the city.

Contact with the USCOE has revealed that they have are not aware of this work and have not said they are pleased.  It is also a violation of the U.S.  Clean Water Act.

3.  Police:  Victimless, non violent non crimes should not be prosecuted punitively unless they cause a crime where someone is hurt or property is damaged or stolen. With a Budget of $666,275.00  perhaps we should consider contracting with the Sheriff’s department instead of fielding our own department?

4.  Fire: At a budget of $92,217.00 they should be equipped with the latest communications devices and the need to sound the Air defense horns should be eliminated except area wide emergencies.

Major issues: Major issues that require large spending should be put to the City for the people to decide.  One such issue is the Suspended walkway.  While it may be too late (maybe) future decisions of this magnitude should  be put to a public vote.    Another issue is the Evans Plunge that until recently was privately owned.  I believe the time is good to put the Plunge up for sale back to private ownership.  There are many reasons, one being that private industry is better at running and improving such an enterprise than government.

Another issue is our heritage in the form of our stone masonry buildings.  Tearing them down as has happened with the Wesch Oak building. This is inappropriate and costly to the taxpayers   This is  the second event I know about of this nature and the cost to the taxpayers that will never be recovered is approximately $200,00.00.  Decisions such as made regarding the Wesch-Oak building based on $1,500.00  engineers report with no allowance for a second opinion must never happen again.

Ordinance’s:  Currently we have numerous ordinances that are not enforced equally or not enforced at all except by complaint to bludgeon ones neighbor or silence a vocal citizen.  A hard look needs to be taken to rescind or amend many of these.  Saving structures of historical nature is appropriate but requiring and determining the appearance, signage, improvements based on a select period of time in history is inappropriate and a violation of basic property rights.

I visualize a prosperous community with a SERVANT government that seeks to help one another mutually and embraces new ideas, volunteerism and self responsibility.  Above all a community were we cherish our most valued and sacred constitutional right as stated by Supreme  Court Justice Louis Brandeis  “The right to be let alone.”    i solicit your vote and participation in this election process.  The next two years are going to be difficult with the major construction through town.  We will endure as free people with patience and mutual respect for each other.

Making decisions by consensus is almost impossible so in a Democracy it is by majority.  The worst thing about democracy is being the minority even it is 49%.  However in  a  democracy everyone deserves a place at the table of discussion and good leaders have learned the definition of compromise. Proper government encourages  discourse, discussion and joint decision making. We cannot afford a city council with no imagination.

Link to Watch Uriahs' Mayoral Meet and Great at the American Legion:

link to watch meet and greet